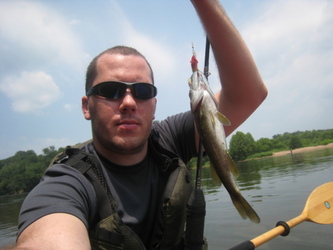 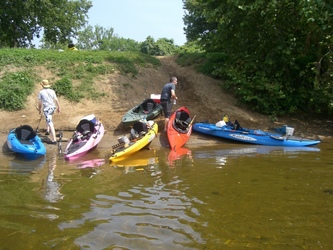 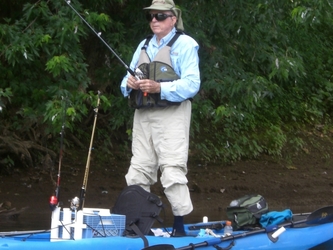 We had originally intended to do Howardsville to Scottsville this day, but the day before the trip we discovered that the landowner who leases the rights to the Howardsville landing and the commonwealth had not come to terms and been able to renew the contract allowing public use of the landing. So we scrambled to make something else happen and decided on Hardware River to Bremo Bluff, a section we had done before. We showed up at Hardware River in the morning to find that the bridge over the Hardware River was being rebuilt and would be completed in a couple of weeks. Plan C, we consulted our Gazetteer and found a little landing about half-way between Howardsville and Scottsville at Warrens Ferry. We had planned to be paddling this stretch of river because we wanted to paddle along-side the batteaus and June 23rd was the day the batteau festival was planning on traveling from Howardsville to Scottsville. We were able to get out on the river, albeit a little later than planned, and at least do a stretch we hadn't done before. We guess there were probably a lot of other folks on this stretch of river this day because of the batteau festival as well, but we've never seen so many people and boats on any other stretch of river. There was an odd feature on this strech that we haven't seen anywhere else on the river. A little ways below Warren there was an island in the middle of the river that seemed to be mostly a giant rock (30 foot tall or so) that had collected dirt and had trees grow up on it over time. It was pretty cool, and had a little ledge kind of hanging over a deep pool where people could jump off into the water below. Other than that, about the only other feature of note was Hatton's ferry. Hatton's fery is the last pole ferry in operation in the USA. Unfortunately we didn't get to see it in operation as we passed by. Not sure if it was because the water was too low or we just came by in between crossings. We were fortunate enough to be accompanied by the entire male side of the Lyles clan on this trip, or at least the Richmond group... that are older than 2. All of us have been out on the river with each other at some point, but never all of us together. A good time was had by all.