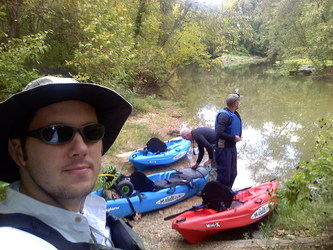 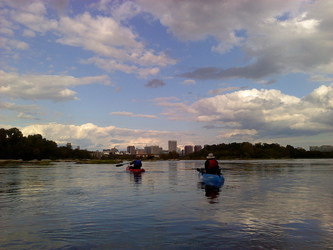 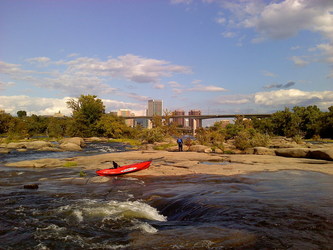 For this stretch of river, we went with the shortest boats we had, because we weren't concerned with storage or fishing, we just needed the best maneuverability. Leading up to Belle Isle and after the 14th street bridge are calm waters, in between is anything but. We had no intention of running the class IV and V rapids in this stretch, so we chose safer routes and dragged our boats on rocks and over and around dams when we had to. This stretch isn't exactly the safest stretch of the river, and we won't recommend it to anyone who doesn't have a lot of experience on the river, even if you plan on avoiding all the big rapids. After we came up to the head of Belle Isle, we immediately headed towards the center of river left, where we figured would be the safest route. It was slow-going through here as it was a little chilly and we wanted to stay as dry as we could. So we picked our routes carefully to avoid rapids as much as possible. Other than taking a while to get through the section next to Belle Isle, we made it through without any incidents. After Belle Isle we made towards river right to avoid a rough section where an old dam had been busted up. We ended up having to pull our kayaks over a logjam and across the dam on the far right to avoid any rapids. Shortly after crossing this dam, we came up on a much more dangerous dam on river right, where we had to pull off the river entirely and pull our boats around the dam. After this portage, we put back on the river at the tail end of a class III and rode a wave train for a little bit towards the last of the rapids on the James River. We hadn't quite made it out of the rapids before Jason took his turn getting dumped into the river after getting pinned to a rock. At last, the end of the rapids, and the beginning of the tidal James. One interesting thing to note about this area is that crabs will come up from the Chesapeake Bay during the summer when the water is lower. It can be a little surprising the first time you look down and see a crab swimming in the rapids if you didn't know they came up as far as Richmond!