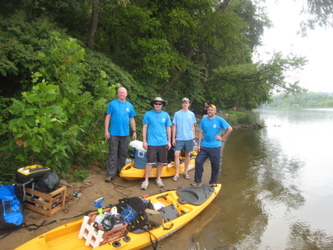 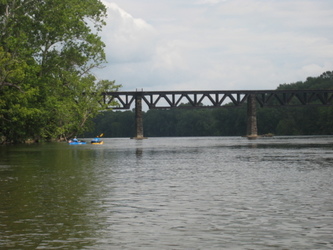 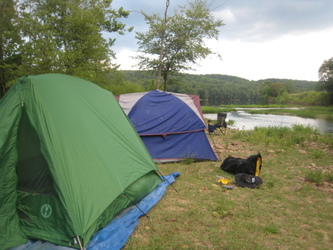 This stretch of river was one that we signed up for as part of the James River Associations 3rd annual Runoff Rundown event. The event is a fundraiser meant to bring attention to the James River by having participants cover every section of the river in one day. We signed up for Lynchburg to Galts Mill. We caught a little bit of a break this weekend. The weather had been oppressively hot with 100+ degree days being the norm. Some rain had moved through and gave us cloud cover and only low-90s temperatures the first day. Sunday was also in the low 90's, but without the cloud cover. Certain stretches of the river seem to be a little bit prettier, or more interesting in the summertime when the water is lower and clear and you can see the rocky bottom and any fish between you and the bottom. This is definitely one of those stretches, although given the amount of dragging boats we had to do to get over all the shoals and ledges, we won't recommend doing this stretch in the summertime. This is definitely one where you'd want more water in the river, and hence probably a better trip in the spring. The water flow for these 2 days at Bent Creek was between 1200 and 1400 cfs, and the water gauge was around 3 feet. We would recommend you go when there's at least 4 feet or so of water, and avoid all the scrapeage and dragging boats over ledges. We weren't scraping the whole way, as there are definitely enough areas where you can paddle just fine, and several areas with deep holes for some bigger fish to hide in. We made about 19 miles the first day and camped at the head of an island. We often will try to do the majority of a 2-day trip the first day so when we get poor sleep, we won't have as much paddling to do the second day. We all actually slept fairly well on Saturday night though. Guess the investment in self-inflating air mattresses paid for itself. Brian and Tom caught several 10-14 inch smallies the first day while Michael and Jason just concerned themselves with paddling and relaxing. The second day, nobody spent much time fishing and we mostly just paddled and took a long lunch.