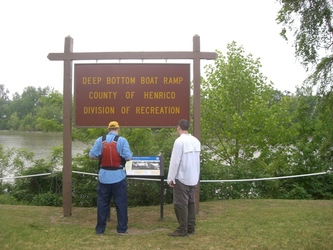 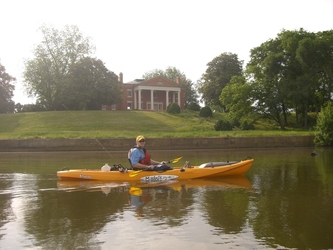 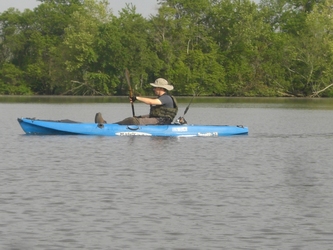 By now we don't have to stop and think about which boats we want to paddle anymore. We each are comfortable with our boats of choice, Stealth-12 for Brian, X-13 for Tom and X Factor for Jason. On this stretch, we started to appreciate the stability of the Malibu kayaks. From Hopewell to the bay, the river is significantly wider than before, and we will have to be worried about ocean-going boat traffic, their wakes and wind whipping up waves on the water. But it's not as bad as we thought it might be. We've all been a little apprehensive about paddling the bigger water east of Hopewell, but this stretch helped to allay our concerns. Paddling across the open water before the Benjamin Harrison bridge wasn't a big deal, especially since there was virtually no boat traffic on that Tuesday morning. Wildlife abounded on this stretch. In the morning, as we passed Jones Neck, the fish were constantly flopping out of the water and thrashing about in the shallows. We scared away plenty of deer that were feeding near the river bank, and there were several bald eagles. Osprey and blue heron nests also dotted buoys and trees along the bank, and we scared away a goose when we paddled right next to a hunting blind. Guess he knows hunting blinds are safe this time of year. :) At one point before the river got big we saw something pretty sizable breaching the water near the center channel. Jason went to go check it out, but whatever it was had stopped breaching by the time he got over there. We've heard that we might possibly see Atlantic sturgeon on the James, and were hopeful that we were seeing one, but didn't get a chance to confirm it. As the river gets wider and we get closer to Jamestown, we've started to see some plantations from the river, including Shirley Plantation, Virginia's oldest, (founded in 1616) and Appomattox Manor.