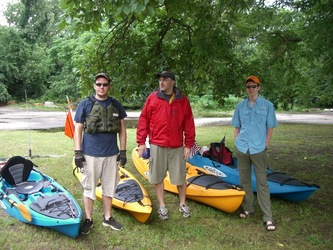 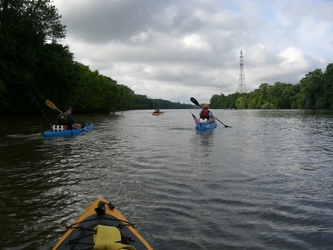 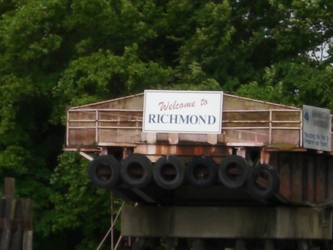 We've paddled several different sections of the river before, but this was the first section we did after deciding to paddle the entire river. Initially we had planned on making this an overnight and trying to get to Hopewell at the end of the second day, but decided last minute to just do a day paddle. It was a good thing too, because we were worn out after a day of battling the wind and rising tide for almost 17 miles, and looking forward to sleeping in our own beds instead of in a tent. This was our first experience in the tidal James and we weren't used to getting pushed back upstream when stopping to take a break. As you can imagine, the river is a lot more cluttered with junk through here than above Richmond. The stark contrast in the volume of garbage in the water and on the bank here vs. upstream is startling. Michael Lyles was able to join us on this trip and the trip the following day from Columbia to West View. Michael and Jason didn't concern themselves with fishing on this stretch of river. Tom and Brian did, but it was hardly worth their effort, reeling in only a few unimpressive smallmouth. The wildlife was limited to a few herons, a bald eagle and some of the black vultures that hang out at the Dutch Gap landing. This stretch has definitely been different than a lot of the other stretches we've done that have mostly been fairly remote, or at least felt remote. Here we passed by the port of Richmond, a lot of old barges, a power plant on the water at Dutch Gap, under the Pocahontas Parkway and the 295 Varina-Enon bridge, and past a marina at Osborne's Landing where all the guys with bass boats were putting in. Except for the stretch between a couple miles above Watkins Landing and Bosher's dam, there's hardly any motorized boat traffic upstream of Richmond, and that's all little jonboats. Here we were having to start paying closer attention to when we crossed from one side of the river to the other to avoid getting run over.